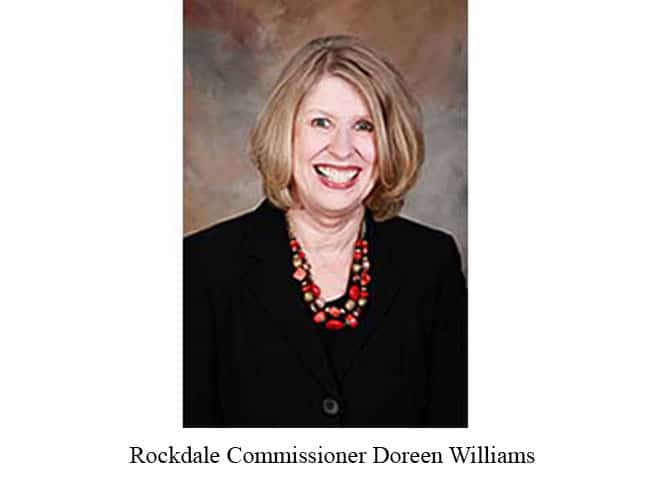 After an outcry from citizens at the public hearings this week, Rockdale County Post 2 Commissioner Doreen Williams says she will not support the county’s proposed 7.94 percent property tax increase.

The three-member Rockdale Board of Commissioners  is set to vote on the matter on next Tuesday, Aug. 24, after the final public hearing, which will be held at 9 a.m. at the Assembly Hall, 901 Main St., Conyers. The board has held two public hearings: Aug. 17 and Aug. 19.

Williams told On Common Ground News (ocgnews.com) this morning that the county should look at other options since more funding is now available from multiple sources.

“I would propose that we go to the rollback millage rate. If we go to the rollback rate, we will have to prioritize the budget very closely. ARPA (American Rescue Plan Act could fund some of our projects,” Williams said. “In addition to ARPA funding, we have raised more money through SPLOST(special Purpose Local Option Sales Tax) and HOST than anticipated. Money has come from multiple sources that were unexpected.Williams issued the following statement:

I have heard the citizens comments during the public hearings Tuesday evening and Thursday morning regarding the proposed millage rate for Rockdale County’s property tax. Taking several things into consideration I have decided that I will not support the tax increase for the following reasons:

I understand that this may delay some of the projects the county has planned. But I remain committed to prioritizing A) economic development and B) public safety, especially regarding our mental health population that is involved with the criminal justice system.

The people have brought clear, articulate reasoning and advocacy to my attention. I hear you, and I respect your input. I do not make the decision individually, but you can count on me to move that the board vote to take the rollback rate.”

With Williams’ decision to vote against the property tax increase, the measure would require approval by Post 1 Commissioner Sherri Washington and Chairman Oz Nesbitt, Sr.