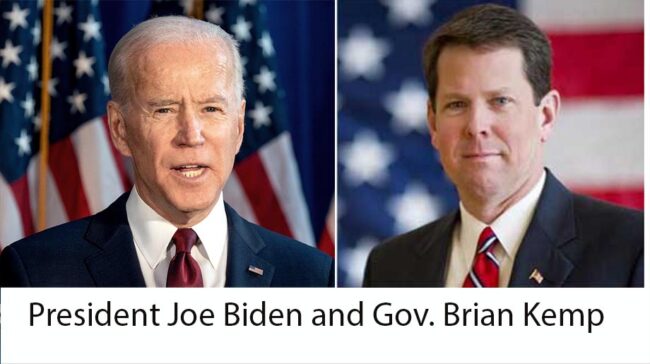 ATLANTA, GA—Gov. Brian Kemp is vowing to fight President Joe Biden’s vaccine mandate for all employers with more than 100 workers.  President Biden announced the plan during an address from the White House on Thursday (Sept. 9) in an effort to contain the rising delta variant that health officials are reporting is killing thousands each week.

The plan would affect as many as 100 million Americans, requiring them to be vaccinated or tested for the virus weekly.

Kemp tweeted on Thursday during President Biden’s address that he would pursue every legal option to fight the federal mandate, calling it an “unlawful overreach.”

“We’ve been patient. But our patience is wearing thin, and your refusal has cost all of us,” President  Biden said, speaking to the nation.

Currently, 44 percent of Georgia residents are fully vaccinated, state health officials report. The Department of Public Health reported on Sept. 9 that Georgia has 488 hospitalizations from COVID-19 and 155 confirmed deaths.

DeKalb County has been at the forefront of the push for vaccinations. DeKalb CEO Michael Thurmond has worked with county officials and used federal American Rescue Plan Act(ARPA) funding to offer pre-paid debit cards as incentives for those who received vaccinations. At the county’s Aug. 28 event, which was held at The Mall At Stonecrest’s Sears parking lot, 2,426 people were vaccinated and received $100 debit cards. County officials said 1,158 people received shots at its Aug. 14 event, which was held at the Gallery at South DeKalb mall. Thurmond kicked off the pay-for-shots initiative in July, offering $50 debit cards to the first 300 people who received shots.

In Rockdale County, officials are reporting continuing to see a surge in COVID-19 cases with Rockdale listed in the “High” category. As of Sept. 8, Rockdale was averaging 42.9 new cases per day over the past two weeks. Rockdale has had a total of 7,931 and 175 deaths to date, according to a report by Meredith Barnum, Emergency Management  Agency specialist for Rockdale County.

Meanwhile, the Children’s Health Defense (CHD) is launching a nationwide “Walk Out Week” starting on Sept 13 in response to mask and vaccine mandates in schools and businesses around the country, the organization in a news release.

Parents, educators and concerned citizens across the U.S. will participate in the coordinated week-long event focused on peaceful non-compliance to remind government officials that individuals should have the final say when it comes to their health and that of their children, the release stated.

The CHD is urging participants in the  Walk-out Week  to keep their children home from school and stay home from work for all or part of the week to organize within local communities to show up at schools, state education departments and local city halls in peaceful protests against mandates.

The following ten states have mandated the COVID-19 vaccine to teachers: Hawaii, California, Washington, Oregon, New Mexico, New York,  New Jersey, Connecticut, Illinois and Washington, DC.  For students, a bill has been put forth in the state of New York to mandate the COVID-19 vaccine by Senator Brad Hoylman and Assemblymember Jeffrey Dinowitz.ore states may follow.

For healthcare workers, 6 states are “vaccinate or terminate“: New York, Maine, Rhode Island, Washington, California and Oregon while twelve other states are mandating the shot but allowing an exception for weekly testing.

“Fed up parents and educators all over the country are joining us for a week-long walk off in peaceful non-compliance with these arbitrary and potentially very dangerous edicts,” Villella McBride stated in the news release. “We need to remind the powers that be that parents should be able to make their own decisions when it comes to the health and well-being of their children.”